The third meeting of the Working Committee (WC) formed by the Local Government Division of the Ministry of Local Government, Rural Development & Cooperatives (LGD-MoLGRD&C) for formulating Institutional and Regulatory Framework for Fecal Sludge Management (FSM) was held on 24 August 2015 at 10:00 a.m.  at the Seminar Room of ITN-BUET. Mr. Md. Akram Al-Hossain, Additional Secretary and Wing Chief (WS), LGD-MoLGRD&C, and Chairperson of the WC chaired the meeting. Mr. Kazi Abdul Noor, Additional Secretary and PD, PSU and Professor Dr. Md. MujiburRahman, both co-chairs of the WC, were also present at the meeting.

Dr. Muhammad Ashraf Ali, Director, ITN-BUET & Professor of Civil Engineering, BUET and Member-Secretary of the WC welcomed all on behalf of ITN-BUET. Mr. Kazi Abdul Noor then explained the importance of FSM framework for protecting the public health and environment. He said that it is a timely decision to formulate FSM framework for protection of public health and environment. He also expressed his hope to complete the FSM framework draft within the sanitation month of October. 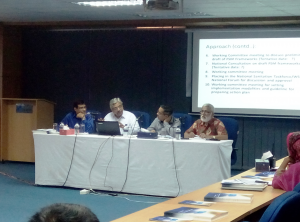 Discussions were held among the participating institutions and their responsibilities to implement the FSM service chain in both urban and rural areas. The list of participating institutions was finalized in the meeting. Discussions were also held on formation of sub-committees for drafting of FSM Framework for different settings. After detail discussion, sub-committees for drafting FSM framework were decided as follows: 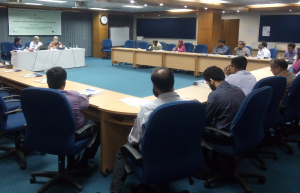 ITN-BUET will provide a guideline for drafting of FSM framework and coordinate activities of all drafting sub-committees. It was decided that the drafts would be shared with all working committee (WC) members before finalizing it for presentation in a national consultation so that they can provide suggestions. Efforts will be made to complete draft FSM framework by October 2015, which will then be placed in the National Sanitation Taskforce/WSS National Forum for discussion and approval.