“With great power comes great responsibility” – we have heard this before and often. The depth and warmth of global response to the 7.8-magnitude earthquake that struck Nepal on April 25, 2015, however, gave a different message – with great responsibility comes great power. Following the news of devastation, people around the world reached out to the first Nepalese they could think of. They would ask: what can I do for Nepal? In Nepal, people united to help each other. Responsibility is thus taken, not given. And therein lies the power of being responsible. The power to give. The power to motivate.

The OpenStreetMap (OSM) project introduced a non-conventional way of reaching out to the people in crisis through development and sharing of open-source maps. These maps are built entirely by volunteers, surveying with GPS, digitizing aerial imagery, and collecting and liberating existing public sources of geographic data. The information in OSM can fill in the gaps in base map data to assist in responses to disasters and crisis. Today more than a million OSM volunteers are active worldwide. Mapping events are organized from time to time to encourage beginners to join the OSM movement. 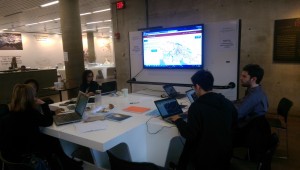 The OSM community immediately leaped into action as soon as the news of devastation in Nepal became widespread. At the Harvard Graduate School of Design which is hosting me as Fulbright visiting scholar, Dave Hampton and Shanika Hettige got together to set up an OSM mapping desk, and Alberto Embriz De Salvatierra and students from other Harvard schools collaborated to create a website (www.nepalquakeaid.com) to aggregate information on post-earthquake Nepal as well as include resources for volunteering, donating and mapping. At the same time, an OSM summit was being organized in Washington D.C. It was the right opportunity to learn about the emerging role of open-source maps for crisis management.

About 160 OSM volunteers showed up for the Mapping for Nepal Mapathon at the Red Cross Office in Washington D.C. on the eve of first-ever HOT Summit (April 30 – May 1, 2015). The Humanitarian OpenStreetMap Team (HOT) is an initiative that applies the principles of open source and open data sharing for humanitarian response and economic development. Many OSM collaborations have emerged over the past few years such as Missing Maps, MapGive, MapBox, MapTime and so forth, with many projects active at the country level. The Kathmandu Living Labs based in Kathmandu, Nepal has been playing a critical role in facilitating rescue operations through OSM maps and dataset in the aftermath of recent earthquake in Nepal. The OSM community in Nepal was already thriving prior to this earthquake. 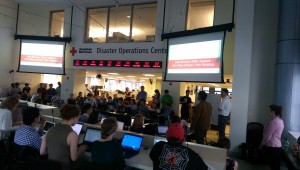 Although it sounds ironic, the Nepal earthquake has provided a rare opportunity for the mapping agencies and professionals all over the world to test their technologies and methodologies (see How Nepal’s Earthquake Was Mapped in 48 Hours). Not surprisingly, the Nepal earthquake dominated virtually every speech and presentation made during the three days of the HOT Summit 2015.

There was a consensus that compared to other countries hit by natural disasters recently (for instance, Haiti), Nepal is better positioned in terms of information infrastructure. Besides the Government of Nepal’s own rich information repository, agencies such as Red Cross, UN-OCHA, USAID, UNDP, ICIMOD, and NSET, among others, have also accumulated a wealth of knowledge on the country’s vulnerability to natural disasters. However, at the summit, it was noted that maps prepared by the government in Nepal – or in many other countries, for that matter – are not in the public domain, and are therefore inaccessible and useless despite their worth.

The Nepal Earthquake was not the only case discussed in the HOT Summit (see program). Other examples addressed issues of health and environment. 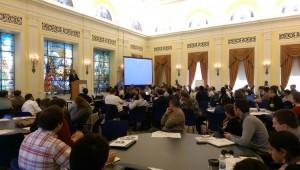 The inaugural day of the summit (Photo: Kirti Joshi)

In the aftermath of the West Africa Ebola outbreak in March 2014, response organizations used OSM to locate existing hospitals and newly built Emergency Treatment Centers, for offline navigation, and to track the outbreak in real time. In Nigeria’s fight against continued transmission of Wild Polio Virus, the use of GIS maps and GPS tracking helped locate settlements (in particular, children without Oral Polio Vaccination), prepare micro-plans and monitor the activity of vaccination teams. Likewise, another example from Nigeria featured how e-Health Africa used OSM to develop heath care and public health access support system.

In Indonesia, OSM helped build better contingency plans in case of flood disaster by mapping and maintaining information about the location of critical infrastructure and then combining it with disaster and hazard data models to simulate the effects of disaster incidents. Likewise, using OSM, thousands of kilometers of logging roads in the Congo Basin were mapped to monitor their growth in a bid to mitigate forest fragmentation and land clearing. In Kibera, a slum in Nairobi, Kenya, OSM was used to map informal schools with data ranging from number of teachers to school fees.

How to map using OSM?

The first step is to get registered with OpenStreetMap.org. Mapping projects are available at http://tasks.hotosm.org. The steps for using OSM are explained meticulously at www.nepalquakeaid.com/mapping, which also includes an instructional video. Beginners’ guide on OSM is available at http://learnosm.org/en/beginner with more resources at http://hotosm.org. OSM is an evolving system. Developers are continuously adding rich features to the system through plug-ins. However, it is possible to search information on OSM through a specialized Google search Openstreetmap domain (bit.ly/osmsearch). Much of the OSM knowledge comes from learning by doing.

The summit also featured innovative and ambitious projects on digital mapping. For instance, with an aim to image the entire planet everyday, Planet Labs built and launched 87 satellites in the last year alone, which are imaging successfully at 3-5 meter resolution. Unmanned aerial vehicles (UAVs) such as drones, and high resolution cameras are also becoming increasingly popular, available and affordable. They can capture highly detailed imagery within days of an event. All these technologies can readily be used with OSM, and in fact, agencies behind most of these technologies are either OSM partners or close associates.

The South Asia region is vulnerable to numerous natural disasters such as earthquakes, flooding, landslides, drought, climate change, or disease outbreak, to name a few. Information, no matter how well shaped, cannot substitute the real actions. But it can help save lives. It can help minimize losses. It can help organize resources which are more scarce at the time of crisis. By being free and readily available, the OSM maps help reduce the time and cost of disaster preparedness and management. And by being free and readily available, it can be learnt and taught by anyone regardless of age, and anywhere in and outside the academic curriculum. When crisis cannot be prevented, preparedness is still better than cure.

Back to the Nepal Earthquake

No amount of donation or words of sympathy can ever compensate for the sudden loss of loved ones. The loss of properties is a wound that may heal over time but not without scars. The only compensation is that much worse could have happened but it did not. In the long run, however, there is another compensation – the light at the end of the tunnel. The scale of documentation of the recent earthquake, the use of mapping technologies, the networking of mapping agencies and volunteers, and the experience of rescue operations will undoubtedly leave a treasure of knowledge. Such knowledge can help build a safer world for future generations. The recent earthquake changed many things but it did not change the fact that Nepal was, is, and will always be seismically active. But with the current wealth of knowledge, Nepal would, could and should be better prepared against future disasters.