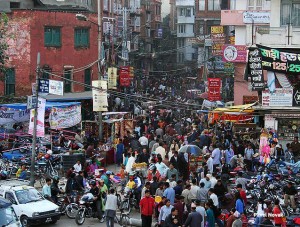 Nepal is urbanizing rapidly with a population of 26.5 million people and is a predominantly rural country with 17.1 percent of the population living in urban areas. The urban areas of Nepal are also growing rapidly. The capital city, Kathmandu is growing at 4 percent per year and is one of the fastest-growing metropolitan areas in South Asia. The city of Pokhara is growing at 5 percent per year. Similarly, Biratnagar, Kirtipur, Thimi, Damak, Itahari and Bharatpur also have growth rates more than 5 percent (NUDS, 2015).

In 2014, 133 new municipalities irrespective of their functional attributes have been added to the municipal category bringing the number of municipalities to 191 and urban (municipal) population to 38.26% of the total. This rapid growth has led to increased demand for efficient infrastructures and services, well structured urban system and a strong economy. National Urban Policy (NUP) 2007 has been formulated to provide guidance for balanced urban development.

NUDS aims to fulfill the existing necessity of a systematic approach for urban development. It provides a strategy for urban development for the next fifteen years (up to 2030) in various urban sectors such as infrastructure, finance, economy, investment, land and governance. It assesses the existing urban situation and proposes the intended urban system for the next fifteen years.

The main objective of the National Urban Development Strategy (NUDS) is to develop medium and long term strategic vision of a desirable national and regional urban system based on existing trends and regional resource potentials. It assesses the existing conditions of infrastructure, environment, economy and governance, establishes benchmarks and desirable standards and identifies prioritized strategic initiatives for investment in infrastructure and environment to realize the comparative advantages of urban areas. It also reviews the institutional framework to facilitate implementation and monitoring of National Urban Policy (2007) and proposed urban development strategies.

The Ministry of Urban Development of Nepal is just three years old and has successfully produced and published National Urban Development Strategy for the balanced development. It strives to be the milestone for the country’s welfare and guides the planning and management of urban areas to ensure comfort to those who reside there. The emergence of NUDS is one of the greatest achievements of MoUD, Nepal. (NUDS, 2015)

The National Urban Development Strategy (NUDS) has been published by the Government of Nepal, Ministry of Urban Development (MoUD) in 2015. The Ministry organized a programme on 16th February 2015 to disseminate the NUDS. The program was chaired by the Mr. Arjun Kumar Karki, Secretary, MoUD. It was graced by the honorable minister Dr. Narayan Khadka, Minister for Urban Development, as the chief guest. The occasion witnessed participation from parliament members, senior officers of various ministries and chief of different line agencies and departments of the Government of Nepal, research organizations, non-governmental organizations and academic institution etc.

All the speakers highlighted the importance and necessity of the NUDS for balanced urban development.