Cities in India are contributing to over 65% of the GDP and crucial economic development. However, these urban centres are growing with major deficiencies in urban infrastructure, citizen’s services, as well as governance mechanism. Against this setting, Municipalika 2014, the 12th International Conference & Exhibition on Emerging Trends in Sustainable Habitat & Integrated Cities was organized with the support of Government of India, Ministry of Urban Development, Ministry of Housing and Urban Poverty Alleviation, State Government of Gujarat and under the patronage of UN-Habitat as well as other state, national and international urban stakeholder institutions. 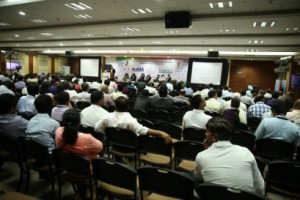 The conference was inaugurated by M Venkaiah Naidu, Minister for Urban Development, Housing and Urban Poverty Alleviation, Government of India. The conference was presided over by Anandiben Patel, Chief Minister of Gujarat, the Host State, in the presence of a eminent delegates from the urban sector in India. In her Keynote Address, Anandiben Patel referred to the many proactive steps taken by Gujarat in the urban sector. She highlighted the efforts for launching Mahatma Gandhi Swachhta Mission to make zero waste cities. Dr Joan Clos, Executive Director, UN-Habitat, in his opening statement referred to the two flagship initiatives World Urban Campaign & I’m a City Changer dedicated to improve the urban future. He made a special stress for dealing with the problems of slum settlements and for improving the living conditions of slum-dwellers and providing them with the regulatory framework for citizen’s participations as well as for incorporating design issues in the built environment and integrating the poverty alleviation issues with employment generation. 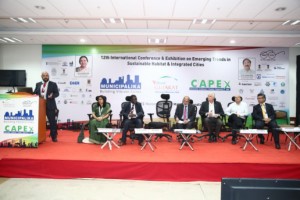 The Swachh Bharat Abhiyaan or the mission for a Clean India that focuses total sanitation was considered the most important intervention for changing the landscape of the country. The conference noted that in addition to the policy support from Government of India, State and Local Governments, the programme can be successful only with the full participative involvement of the citizens. Thus the role of the K-Hub as a knowledge manager can prove to be timely and constructive.

Considering the major challenges in housing in cities as well as provision of shelter for slum-dwellers, under Housing for all by 2022, through the 30 million urban homes the predominant thrust has to be on weaker sections and low-income group. For this Government at the centre, state and local level has to create an enabling environment to get participation of all stakeholders and remove bottle necks and support with additional resources on land, finance, infrastructure and building materials. The role of inclusive planning to provide for the marginalized, poor and disadvantaged is a major message for future city planning. Thus the mandate of the K-Hub for India to undertake research and outreach that fulfill the government agenda for sustainable development; focusing on planning and development that incorporates the needs of the urban poor will be valuable.

There is an imperative need to strengthen local bodies through capacity building at the level of mayors, councilors, city managers, service providers to deal with the multi-dimensional development needs to make cities work. Appropriate training modules suiting each group have to be evolved. This is also an area where the K-Hub could provide inputs to the Government.