How would we build in the messy vitality of Indian streets into the Smart Cities of our future?

Public spaces are essential in developing character and a sense of belonging in cities. Their contribution to social cohesion, enriching citizen experience and building a sense of stability into the fabric of everyday urban life cannot be emphasized enough. The spatial dynamics of healthy open spaces in housing projects impact the health of children, enhance community interaction, and bring a sense of security to the residents. But the most fundamental aspect of public space is that it shapes the identity of the city, and in turn lends meaning to the identity of its resident communities.

The 10th NIUA-ADB-IHC Urban Dialogue on ‘The Role of the Public Realm in Making Smart Cities more Liveable’, held on Wednesday, October 14th, 2015 at India Habitat Centre, New Delhi, set the stage for a lively and insightful discussion on the quality and nature of public spaces in the changing socioeconomic and technological dynamics of modern Indian cities. Mr. Jagan Shah, Director, NIUA described the importance of the public realm in creating more equitable and inclusive societies, and invited Mr. Shyam Khandekar, Editorial Director MY LIVEABLE CITY magazine to open the dialogue.

Mr. Khandekar stressed on the importance of preserving the physical public space in the making of new digital landscapes for cities, and described the significance of public place-making as an important aspect of a liveable city. Giving the example of Mario Miranda’s Mumbai, Mr. Khandekar noted that in the making of smart cities, the cultural legacy of activated public realms cannot be overlooked. Pitting the ‘digitally’ smart New Songdo (S. Korea) City with the ‘socio-ecologically’ smart Heidelberg (Germany), Mr. Khandekar warned of the dangers of injudicious use of technology, and a new wave of social segregation based on the use and accessibility of digital technology. 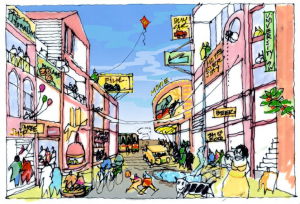 Mr. SK Das, renowned architect and urbanist, pushed the argument further towards more human-centric and culturally significant place-making, stating that the process of creating smart-cities needs to become a collective expression of all citizens. He also stressed on the need for positive re-adaptations of the public realm and its changing functions giving the example of the Kala Ghoda festival and its role in the cultural revival and architectural preservation of the precinct in Mumbai.

The dialogue raised questions on the institutional mechanisms for creating, regulating, or rejuvenating the public realm in the largely private investment driven market economy. It also acknowledged the need for strengthening public sector capacities for self-resource mobilization. The talk however, left us searching for how we could build in the vitality and vibrancy of public spaces that have grown over time into the design briefs of our new cities, and whether such acts of urban design, that accumulate character over time, could indeed be designed at all. Mr. Shah closed the dialogue by reminding us that the public realm in the end is a social choice we make, and technology allows us to co-design and participate in the process of urban innovation.