A Focus Group Discussion with Municipal Association of Bangladesh (MAB) took place at the Seminar Room of ITN-BUET on June 01, 2015 with a view to know the existing situation and practices of Fecal Sludge Management (FSM), and for getting feedback, comments and recommendations from the representatives from Municipalities for the development of Institutional and Regulatory Framework for Fecal Sludge Management in Bangladesh. The discussion was organized by Dustha Sashthya Kendra (DSK), facilitated by ITN-BUET and supported from Practical Action under “Public Private Partnership for Sustainable Sludge Management (FSM) Services”project  A total 25 participants were present in this discussion including Mayor, Panel Mayor, Councilor, Chief Executive Officer, Executive Engineer, Secretary, representatives from Municipal Association of Bangladesh (MAB), DSK, Practical Action and ITN-BUET. Mr. Shamim Al Razi, Secretary General, Municipal Association of Bangladesh (MAB) and Mayor, Singra Municipality was present as guest in this Focus Group Discussion.

Professor Dr. Muhammad Ashraf Ali, Director, ITN-BUET and Member Secretary of Working Committee formed to formulate draft FSM Institutional and Regulatory Framework, briefly described the objectives and importance of this Focus Group Discussion for the development of FSM Framework. He put emphasis on the involvement of Mayor, Councilor, Chief Executive Officer and relevant Municipal personnel at the development stage of FSM Framework and also in successful implementation at Municipal level according to the implementation plans of this Framework.

Professor Dr. Md. MujiburRahman, Co-Chair, Working Committee discussed the background words of this initiative: the development of FSM Framework. Prof. Rahman informed the house that the development of Institutional and Regulatory Framework for Fecal Sludfge Management has been approved on 16th meeting (September 4, 2014) of National Forum for Water Supply and Sanitation, the highest body in the country on Water Supply and Sanitation Sector. He also informed that a number of Focus Group Discussions would be undertaken for this FSM Framework; as a part of this, a Focus Group Discussion has already been taken place with the top management of DNCC, DSCC, DWASA, RAJUK and other relevant stakeholders’ responsible for sludge management in Dhaka city.

In his presentation, Prof. Rahman, discussed various challenge of urban sanitation, global relevance of sanitation, South Asian and Bangladesh context of dependency on on-site sanitation system and Fecal Sludge Management (FSM) cycle. He presented the FSM scenario in developed urban areas in large cities and municipal towns in our country where organized FSM service is not present till date and where FSM services have been initiated. He also showed a skeleton of proposed draft FSM Framework, different important elements of Framework and identified stakeholder institutions for FSM Framework. Then he requested the participants for discussing on what elements they want to see in FSM Framework in municipal town section. 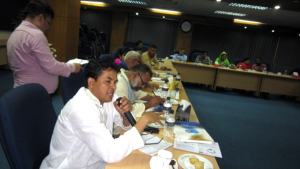 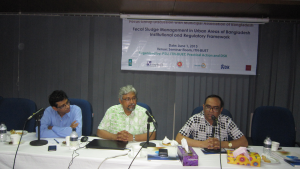 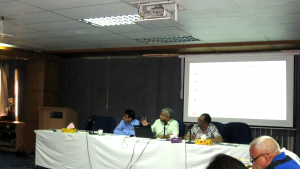 After the effective and informative presentation, participants enriched themselves on the subject matter and later participated in a lively open discussion session. Mr. Shamim Al Razi, Secretary General, Municipal Association of Bangladesh (MAB) and Mayor, Singra Municipality moderated the open discussion session. Floor was opened for everyone and participants discussed their views in different modes by their willingness and request from moderator and both male and female participants took part into discussion. Participants from different municipalities shared their experiences, ideas and opinions related to effective FSM in urban areas of Bangladesh. Issues like technology, expenses for FSM, revenue earning, and training of personnel were discussed at length.

Mr. Shamim Al Razi, Secretary General, Municipal Association of Bangladesh (MAB) opined that a relation has to built between local administration and Pourashava on legal basis so that they can take cooperate each other, when needed. He suggested Chief Executive Officer (CEO) could be solely responsible for magistracy power, where CEO is present. In areas where CEO is not present, one dedicated magistrate could be responsible for four to five municipalities. Mr. Shamim Al Razi wrappedup the open discussion session highlighting a few points as awareness campaign would be run steadily at different level for example district disciplinary committee, district development assistance committee. He opined another consultation meeting with officials of local govt. division is needed and arranging of consultation meeting at regional level would be better. Mr. Razi expressed their commitment to work on FSM in their respective municipal areas.