Social Life, Privatization, and the Management of Resources in the Changing Technopolitical Paradigms of City Planning.

The 11th NIUA-ADB-IHC Urban Dialogue on ‘Technotopias-is a city like a machine or a corporation?‘ was held on Friday, November 27th, 2015 at the Gulmohar Hall, India Habitat Centre, New Delhi. Prof. Sanjay Srivastava, professor of sociology at JNU, and Prof. Awadhendra Sharan, associate professor at CSDS, led the intensive dialogue that provided a critical commentary on the sociological implications of re-imagining urban spaces in the wake of privatization, the blurring of traditional governance boundaries, gender-blind smart technologies, and the changing concepts of citizenship in an age of deep urban social inequalities.

Prof. Jagan Shah, Director, NIUA opened the dialogue by stating the importance of incorporating interdisciplinary perspectives for enriching our collective understanding of the phenomenon of cities. Introducing both the speakers, Prof. Shah explained that the Smart Cities Mission, which the NIUA is spearheading, is not built solely on a technological backbone, and that the viewpoints of the speakers, Prof. Srivastava as a social anthropologist, and Prof. Sharan as an historian were invaluable for gaining an insight into the workings of contemporary Indian urbanity.

Prof. Srivastava began his talk by introducing the concept of Postnationalism, a term he uses to describe the complex changing interrelationships between citizen and state, and state and market in the current capital infrastructure led model of urban development that has seen the erosion of traditional urban hierarchies with the rise of consumerist culture. Giving the example of the Bhagidari (people partnership) initiative of the Delhi govt. introduced in 1998 that saw the partial transference of power from local governance agencies to the Resident Welfare Associations (RWAs), he explained the emerging politics of urban space within the shifted  power arrangements of city governance that have led to the formation of different asymmetries in urban social systems.

He presented two case studies to further the argument of postnationalism- city as a technotopia (smart city) with techno-managerial processes, and city as a corporation with asymmetrical power structures, explaining that both descriptions failed to include messy human nature in their paradigm, since the city as we understand it, is neither a machine nor a corporation, but rather a complex social organism. Prof. Srivastava then gave the example of the ‘city-safe’ app for women’s safety that neglects the complex dialogues between various agents (people, processes, and technology), and thereby runs the risk of becoming a map of ‘urban stigma’ that highlights the dystopic areas in the city (slums, informal, low-income) leading to their further isolation. 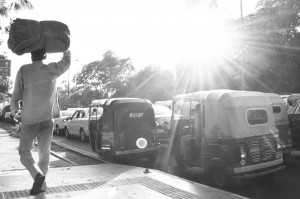 The city is neither a machine nor a corporation, but rather a complex social organism. Image (c) NIUA Photo Contest/N.M.Sree Chaithanya

Prof. Sharan while expressing that he agreed with Prof. Srivastava on the aspects of urban inequality, questioned how the postnationalism discourse was any different from neoliberalism. He also raised questions on the translation of power asymmetries at different socioeconomic levels of the city. Prof. Sharan highlighted the importance of looking at the failures of urban planning, and the role of the state in perpetuating urban inequalities, and added that in the present day understanding of smart cities, with emphasis on energy efficient buildings and smart grids, it is pragmatic to include the politics of resource use within the paradigm of inequality. Prof. Sharan further explained that as we move towards more systemic approaches to understanding the phenomenon of cities, we must plan for redundancy, and ensure that all systems have both a residue (old systems) and a supplement (new systems) since transitions, particularly of social systems, take time.

Prof. Sharan ended his talk by saying that exploring the symbolic meanings of ‘smart’ cities was essential, and said that the stories and narratives of life, the intuitive social processes, need to be engaged within the techno-managerial processes of the cities in policy imaginations.

As we move towards an era of dematerialization of traditional governance structures through e-governance, where citizens become agents of change, the dialogue left us questioning how the current urban asymmetries might effect the access to data and its interpretations, and how we might open up avenues for creating genuine participation, increasing the scope of inclusion and equality, in the building of a new form of civic solidarity that ensures the investment of different urban identities in the common urban public space.