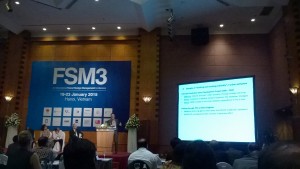 FSM3 was an important event for dissemination of current practices, current problems and new ideas and innovations in the area of fecal sludge management and sanitation in the world. The problems were basically shown to exist in the developing countries, and some recently developed countries. The need of respective governments to make fecal sludge management as one of their policy priorities was highlighted. So far, governments have taken up water supply projects with great enthusiasm, and sludge or septage management had been given a very lower significance in almost all such projects. The ability or capacity of people in the affected countries and its cities to pay for fecal sludge management should be kept in focus when solutions are implemented. FSM3 emphasized that possibilities to use sludge as a resource and substantiated it with examples. The need to get private sector participation, such as through public-private partnerships, as well as the caution to not regulate out the informal sector currently operating in the area of fecal sludge management, were also shown through presentations and discussions. Different social problems involved with fecal sludge management were also brought to light and deliberated upon. Many innovative ideas resulting from focused research on the area were shown, ranging from new toilet designs to new ways of disposing the fecal sludge. Much work on how fecal sludge affects the world’s environment, in the form of affecting the soil, or ground-water, and therefore the health of the people, was disseminated.